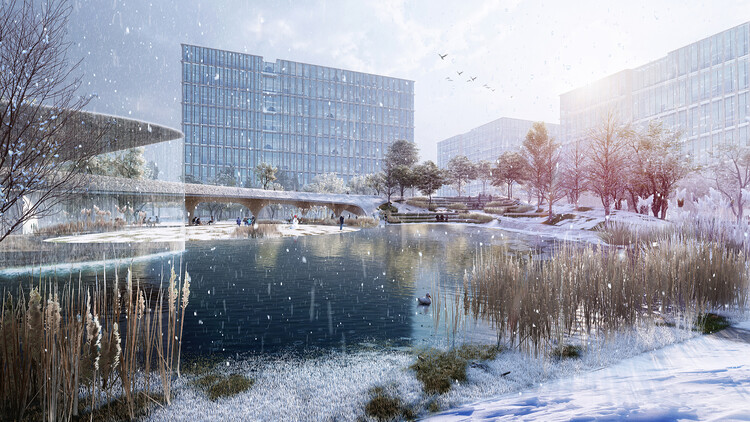 Alibaba is China’s leading e-commerce company and operates the world’s largest online marketplaces for international and domestic China commerce. In the past decade, the multinational company has expanded with well-known architect buildings, such as the headquarters of Hassell in Hangzhou, offices in Wuhan by Benoy, a second headquarters building by Foster + Partners, and the recently announced campus by Skidmore, Owings & Merrill (SOM). , both located in Shanghai, China’s largest city and global financial center.

The design inspiration for the Hangzhou campus comes from the Xixi Wetland, a historical landmark with an extension of 1,150 hectares and a cultural heritage of 4,000 years. Based on the unique local ecological texture, ASPECT created a design proposal focused on interconnected design systems: Water, biodiversity, people and culture combined in a green web network to create a stimulating and engaging campus environment. The program defines three main strategies – health, social and work – each embraced by nature with a site-wide interactive technology system. The landscape creates a series of spaces by drawing the area’s character with an integrated agenda to support a healthy, active lifestyle, reflecting Alibaba’s vision of a place that welcomes everyone.

The project is under construction and is establishing a strong strategy to build and operate a substantial campus in a carbon-positive manner. ASPECT’s approach is guided by the drive to reduce greenhouse gas emissions resulting from the manufacture, transport and installation of building materials. Wherever possible, local, recycled and sustainably produced materials have been used, complemented by a rich green urban forest and extensive native plant schedule.

ASPECT’s work in China also includes the landscape design for the Shanghai Library East by Schmidt Hammer Lassen Architects. The design advocates a symbiotic relationship between people and natural environments and embraces the idea of ​​’collection to connection’ by defining a network of indoor and natural outdoor spaces. The project opened in 2022 and is one of the largest new libraries in the world.

How to Recreate Top Shows at Home

Could these be the hottest design trends of...

The Plan Award 2022 International Winners Include U...

Latest releases from Away, Crate & Barrel and Panasonic