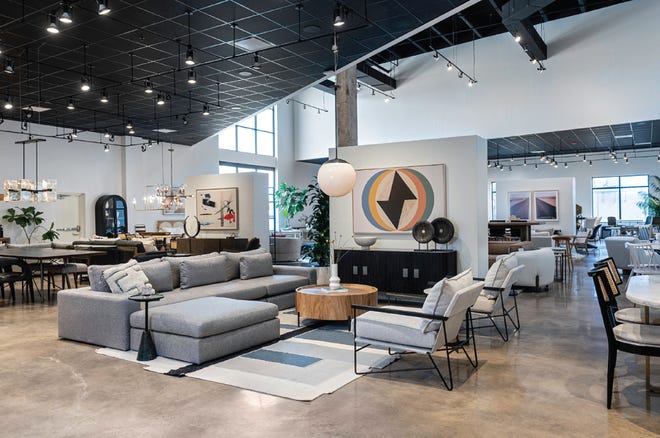 Unlike many businesses, longtime Austin furniture designer and global importer Four Hands has seen a surge in business during the coronavirus pandemic.

“We had a huge increase during the pandemic,” said Jerome Kearns, chief operating officer of the company, which was founded in 1996. “People bought home furniture. Because people stayed at home, the home office was very large. People were spending a lot of time at home.”

Still, the company, which supplied furniture to retailers including Crate & Barrel, Pottery Barn, Restoration Hardware and West Elm, had problems in the supply chain and was sometimes short on inventory.

Those problems have largely been resolved, Kearns said. Four Hands has 700 employees, including 480 in Austin. It also has international operations, which has been a lifeline during COVID, he said. The company has offices in Vietnam, China, India and Indonesia.

“The one good thing about having 150 employees overseas is that we could still work with manufacturing partners and shippers. We had boots on the ground, so we could keep our supply chains going,” he said. “Compared to a year ago, we’re pretty good with inventory.”

Now Four Hands is in growth mode and has signed two leases in Buda that will serve as the company’s distribution headquarters. The two leases at the Buda Midway Industrial Park on Fire Cracker Drive will add more than 360,000 square feet of warehouse space. The expansion is expected to add 50 jobs.

Four Hands will retain its existing headquarters and showroom on Woodward Street in South Austin. It will also retain five warehouses totaling 530,000 square feet of space near St. Elmo Drive will retain what will be used for other purposes, including storage.

In addition, the company opened a 35,000-square-foot art studio earlier this year that produces exclusive handmade pieces across a variety of mediums, from watercolor to photography. To date, the company has curated more than 4,000 images from a rotating roster of 150 artists.

Four Hands first looked for industrial space in Austin, but it was unfeasible, Kearns said.

“We couldn’t find the kind of buildings we were looking for,” he said. “We looked at Georgetown and that was pretty tight as well. Then we looked at the Buda/Kyle area and there’s quite a lot of industrial development going on. We were very excited to get some properties in Buda.”

Current distribution employees will relocate to the Buda locations, and Kearns is optimistic about recruiting additional employees to the area. Other warehouse providers in the area include Amazon.com and US Foods.

“We’re in good company in that part of the area,” Kearns said. “One of the reasons we like Buda is that there’s a good labor pool there. With gas prices being high, it’s a shorter commute for people. We’re very excited about the demographic and recruiting from a very good labor pool.”

Privately held Four Hands posted $450 million in revenue in 2021 and is on track to reach $1 billion in sales this year, the company said.

More:Why the demand for industrial space in Austin is rising

More than 8.4 million square feet of industrial space is under construction in Central Texas, according to Colliers, a commercial real estate brokerage firm.

Millions more square feet — with one estimate up to 30 million more — are in the planning stages, though industry experts say it remains to be seen whether all of these projects will be built.

By the end of next year, 20.7 million square feet of industrial space is expected to be added to the Austin market, according to Colliers, which said 48 buildings are under construction, including six of more than 300,000 square feet or larger.

The boom in the Austin area’s industrial sector is a good sign for the region’s economy, said Ray Perryman, a Waco economist.

Industrial production brings in money from outside the region, along with the tax money paid by those big corporations. The increase in industrial space can also benefit consumers by getting their hands on goods faster.

“Consumers are demanding goods faster than ever, requiring goods to be stored in warehouses closer to consumers,” said Sam Owen, managing director and partner in the Austin office of Dallas-based Stream Realty Partners.

US reporter Shonda Novak contributed to this report.

BeautiTone Reveals its 2023 Colour of the Year,...

Tour A [email protected] Home Transformation: How A Couple...