GRAVETTE — Gravette’s Main Street was bustling with activity on Thursday evening, October 20, with the largest crowd yet coming out for the final third Thursday event of the season.

Vendors’ booths lined both sides of the street, with several returnees and a few first-time vendors offering everything from gift items to clothing, candles, and home decor. One booth even had some cuddly puppies for sale. Snacks were popular, with jams and jellies and pastries, including a decorate your own cookie box, which sold well.

Several Gravette businesses stayed open late and visitors could stop by Gravette Nutrition for a healthy shake or specialty tea or enjoy ice cream treats at Lili’s Bubble Waffle. Kim McDougal set up a booth outside her shop, Total Bliss, offering markers and accessories to dress up for Halloween. She painted the faces and the fingernails of some young people who visited.

Members of the Old Town String Band brought their instruments and entertained the crowd in front of the Chamber of Commerce office. Most group members are Lions Club members and they also sold bags of pecans for holiday baking and tickets for their crockpot festival fundraiser.

As darkness fell, vehicles began to arrive for the evening’s Glow and Show, organized by Shane and Jenny Hargrave of the Gravette Cruise and Car Meet. Several cars were decorated with bright lights, and glow sticks were handed out to people in the crowd who were soon seen wearing glowing necklaces and bracelets they had made from their gifts.

Winona Brackeen of Bella Vista, president of the NWA Camaro Club, brought her white Camaro with red and blue trim. When she opened the hood, a striking emblem of the New York skyline and the Statue of Liberty against a colorful flag background was painted on the hood and engine block.

A van from KIX 105.3 radio station in Fayetteville added to the display with its lights flashing on and off in ever-changing colors.

This was the last of the Third Thursday events for this year, but the Chamber is planning a Hometown Christmas event on Saturday, December 10, which will bring food, fun and holiday treats back to Main Street. A variety of merchant booths will be set up again, and activities will include a Kids Zone with carnival games, a live nativity or petting zoo, a window decorating contest for area businesses, a business bingo game and a Christmas tree lighting.


Westside Eagle Observer/SUSAN HOLLAND Winona Brackeen, of Bella Vista, poses with her white Camaro that displays a striking emblem of the New York skyline and the Statue of Liberty against a colorful flag backdrop. The image is painted inside the hood and on the engine block. Brackeen is president of the Northwest Arkansas Camaro Club. She came to Gravette to participate in Thursday’s Glow and Show event. 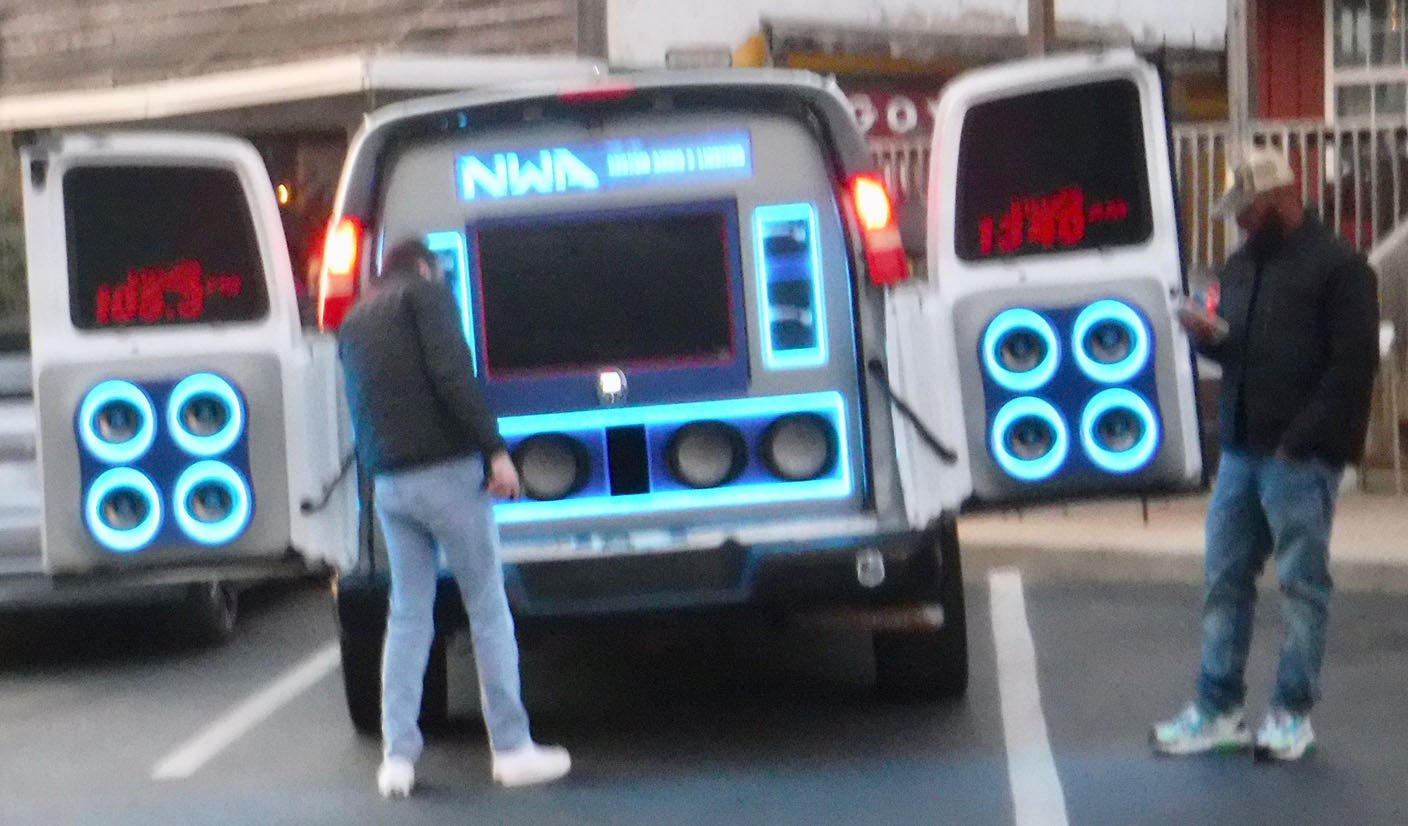 Westside Eagle Observer/SUSAN HOLLAND Virgil Boggs (left), account manager at KIX 105.3 radio station in Fayetteville, and Artavius ​​”Spida,” KIX radio personality and account manager for CTG Records, brought the station’s van to Thursday night’s Glow to participate and Show event in Gravette Main Street. The van added to the colorful display with flashing lights cycling from one color to another.

Westside Eagle Observer/SUSAN HOLLAND As darkness fell Thursday night, vehicles began arriving for the Glow and Show event organized by Shane and Jenny Hargrave of the Gravette Cruise and Car Meet. Many had flashing lights, and soon the street was lit up with this colorful display. Glow sticks were handed out to visitors, and several people could be seen walking around wearing necklaces and bracelets matching the illuminated vehicles. 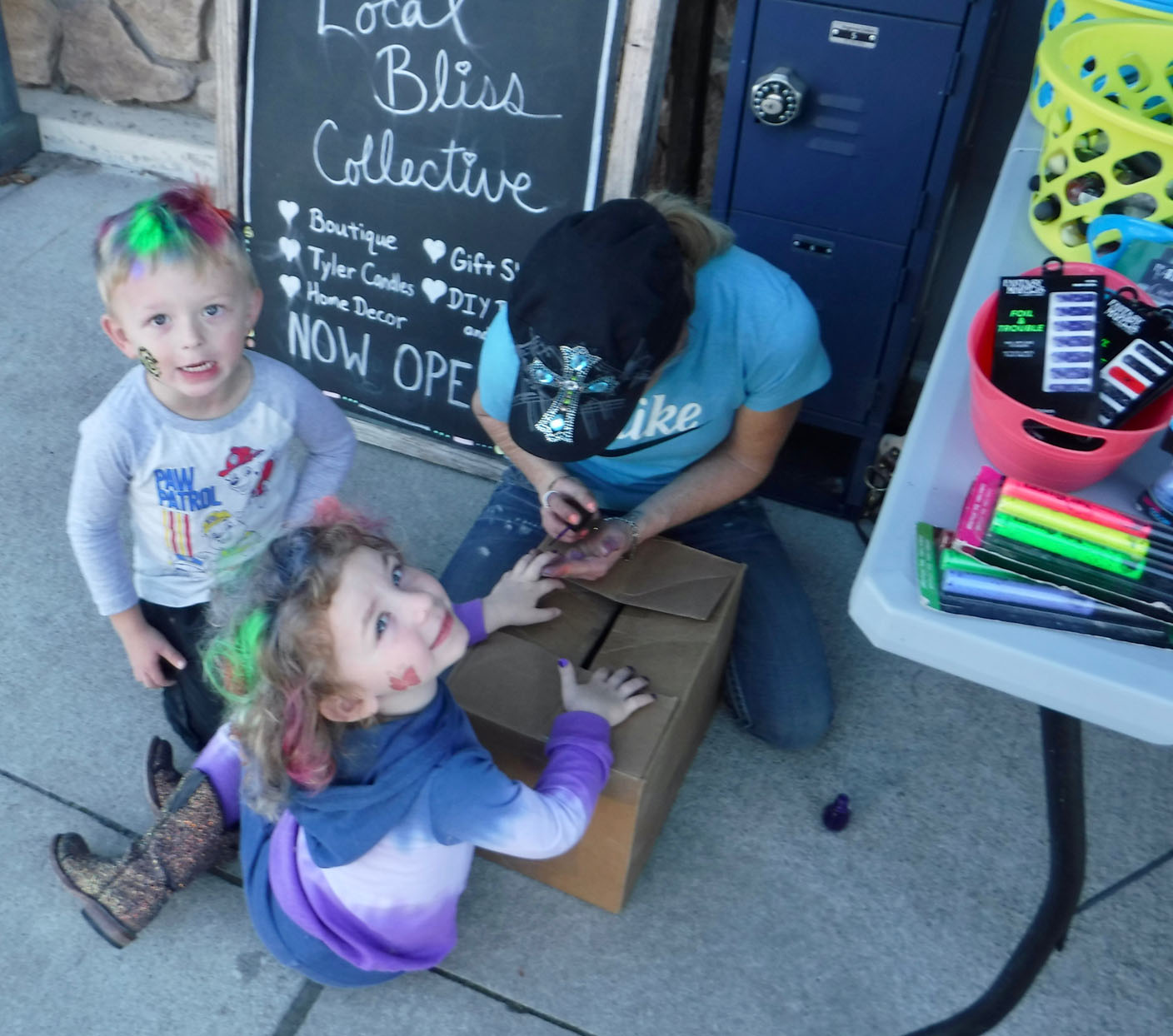 Westside Eagle Observer/SUSAN HOLLAND Kim McDougal, owner of Local Bliss Collective, set up a booth outside her store offering markers and accessories for painting one’s face. Here she paints the fingernails of young Bellamy Summerlin (3) from Gravette. Bellamy and her brother Canan, 4, who have already had their faces painted and hair dyed, smile for the camera as McDougal decorates her.

Bed Bath & Beyond’s Apes Should Get Out...

Get great gift ideas and win prizes in...

New ceramics shop is a family affair with...